As the national team captain, he helped his country to qualify for the Summer Olympics of 2012, which took place in London. He would be recalled that the national side which was absent from the Olympics for eight years. He scored the winning goals that qualified the country to become part of the most glamorous games in the field hockey world. During that qualifying series, it was on record that Sandeep Singh scored a total of sixteen goals.

After leading the national team for 5 years, he bowed out and returned to the club hockey. As a club player, Sandeep Singh performed for both local and foreign clubs. After bowing out he decided to follow a coaching career. He quit the sports in the year 2017 when it was certain that age was no longer on his side.

Sandeep Singh as a Club Player

It was not only in the national team that this all-time best Indian hockey player made a remarkable footprint. He was part of the sport when the hockey India league was introduced in the year 2013. He made history when he became the fifth highest-paid marquee player by the Mumbai franchise. The club does not regret the amount they spent on this player because out of the 12 appearances he made for that club, Sandeep Singh scored 11 goals. In short, he was the highest scorer of the Indian inaugural tournament.

Following the remarkable impacts, he made at home, he was hired in the year 2014 by the Havant Hockey Club, which is a top league, English field hockey club. He was one of the first Indians to take their playing career to the United Kingdom. He made a remarkable impact in the 2014 to 2015 league season of the topmost division where he scored 24 goals. This made him the highest goal scorer for the team and the third overall best in that division. 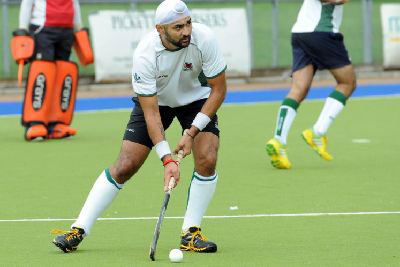 He also played for the Punjab Warriors in the year 2014 where he played for two years. While he played with Punjab, this celebrated hockey player was able to score a total of 22 goals for his club.

He also played until he sustained a serious back injury that dealt a deadly blow to his HIL career. His career also took him to Australia as well as Europe. He remains one of the most decorated hockey players of all time in his native country India today.

The country recognized the various roles he played in the field of hockey and they have rewarded him with an important award. For his important contributions to the game of hockey, he was rewarded with the Arjuna award in the year 2010.

In the year 2009 when he led the Indian team to win the famous Sultan Azlan Shah Cup, he was named the Man of the Tournament, because he scored the highest goal. He was rewarded for that.

It is important to note that apart from serving as the foremost hockey player ever produced by his country, Sandeep is a serving police officer. He currently serves as DSP in the police of India. His interest in hockey led him to marry an enthusiastic hockey lover. He fell in love with this junior hockey player named Harjinder Kaur, when he was a teenager. The two met in Pakistan where their families had moved into. It was easy for them to enter a relationship as they were very close.

The two hockey players were engaged in the year 2008. As at the time they were engaged, they were international hockey players. However, the wife could not pursue her career in that direction as she preferred to take care of their lovely son named Sehajdeep.

Portrayal in a movie

In the year 2014, the actress Chitrangada Singh decided to turn into movie production using the global drag flicker’s story. Shaad Ali used props that belonged to Singh in the movie. Sandeep’s mother kindly handed over items from his collection to the director.

Heartfelt personal items like medals, pictures, trophies and a photo of a guru who Sandeep believes in, were all used in the biopic. Sandeep’s training kit also features in the movie and the hockey champion also gave the makers his favourite hockey sticks. He always used an STX low bow.

A family United in Their Passion for Field Hockey

It can be said that Sandeep Singh family is a hockey-playing family. This is because Sandeep is a hockey player. The same thing applies to his lovely wife Harjinder. His elder brother who introduced him to hockey is still a lover of the game and plays that in his spare time. Even the senior brother’s wife was a hockey player. The family occasionally play hockey together.

The worst time in the life of the hockey player was in the year 2004 when he was traveling to meet members of the national team for FIH world cup which took place in Germany. He was moving on the Delhi Kalka Shatabdi Express. Unfortunately, the Railway Protection Force accidentally shot at the player who was himself a serving police officer.

The accident caused horrific damage to his health as it damaged most of the lower parts of his body. It damaged his ribs and spine – though luckily not permanently. Both his liver and the kidney were affected too. Many people including medical experts thought that it would be the end of his career. His determination made it possible for him to survive that difficult challenge that nearly ended his career as a player.

Narrating his story, this player recalled that when he was in the hospital bed, he asked his senior brother to bring him his hockey stick. He promised himself that he would come back and play his game again. He stayed in the wheelchair for nearly two years. He did return in style.

In the London Olympics of 2012, Singh made a significant impact. He worked very hard for his country to return with trophies. He did not return with anything, but spectators would agree that India were one of the better performers and made a good account of themselves.

When it comes to the individual achievements, hardly anybody could compare with Sandeep Singh. He remains one of the highest scorers not only in his native country India but in other parts of the world.

If you are keen to follow in the footsteps of the drag flick world record holder, Sandeep Singh, used a low bow STX hockey stick, perfect for drag flicking.