Who is the best ever men’s field hockey player?

Why was Dhyan Chand the greatest hockey player?

As I finished my morning coffee and stuck a plaster on my big toe for a cut from the game the day before I began thinking who was the greatest field hockey player ever? I dug out some old CDs then googled it. Major Dhyan Chand was considered one of the most extraordinary field hockey players according to my research.

Let’s focus on the amazing journey of the maestro, who was known for his super ball control. The man who scored more than 400 goals in his career. Born and bred in India, his father got a small piece of land for his war time services in which they could practice hockey. Chand had 2 brothers. Both were also players of the great stick game. What is interesting is the fact when he was young, he was not into sport according to the reports. Famously, he used to practice after the daylight hours. He waited for the moon, so that the field would light up and help increase the visibility. It was also cooler at night. Due to this behaviour, it is believed that he was named, “Little moon” by his fellow players.

The Career of the Greatest Player ever:

Between 1922 to 1926 he played hockey tournaments and regimental games in army. Then he was selected in the team that was to go to New Zealand. The Indian Army Team won 18 matches, drew 2 and lost only 1. He was promoted to Lance night on his return. The newly formed Indian hockey Federation was putting together the team for the 1928 Amsterdam Olympics. In 1925 and Interprovincial tournament was held to select India’s national field hockey team. His skills stood out and he was selected for the national team. India breezed through the competition and faced the home team of the Netherlands.

The conditions were challenging as many players were not feeling well are not well. Against the odds India secured its first Olympic gold medal. Dhyan Chand was the top scorer of the tournament, scoring 14 goals in 5 matches. It was stated that this was not a game of hockey, but magic. Dhyan Chand was a “magician of hockey”.

He was an automatically selected for the 1932 Los Angeles Olympics. The team won the first game, beating Japan, 11 -1. The team kept progressing and once again won the Olympics. After the Olympics the team went on an international tour covering United States, England and several other countries. They won 34 matches out of 37. Dhyan Chand scored 133 out of the 330 goals scored by India. 1924.

Who is the best living men’s field hockey player?

I uncovered Chand is considered the best in history though in modern times a player from Australia is considered by many as the wizard of field hockey. Jamie Dwyer has been named the world’s best hockey player five times, firstly in 2004 and in 2007, 2009, 2010 & 2011.

Apparently, Dwyer’s dream was to win a gold medal at sport and though he excelled at cricket he chose to play hockey for that very reason. After Jamie finished school at 17 he moved down to Brisbane to pursue his Olympic dream. He made the Queensland Blades team and from there was selected into the Hockey Australian Institute of Sports in Perth in 1999. It wasn’t until after the Sydney Olympics that Jamie was selected in the Australian men’s hockey team. When Jamie made his Australian debut in 2001, he had the option of choosing a range of jersey numbers, including the vacant number 1 jersey. It was never really a choice. He had always wanted the number one.

By 2004, the International Hockey Federation had put its official seal on Dwyer’s bullish style, voting him player of the year. He won the prestigious prize again in 2007, 2009, 2010 & 2011 cementing his status as Australia’s best ever hockey player. 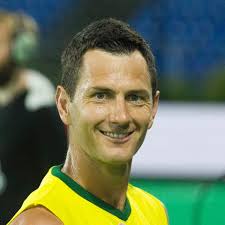 Overwhelmingly dangerous as from set-pieces, Jamie’s individual moves in general play set him apart. His dribbling, poaching and shooting are legendary. One of his greatest goals he scored at the 2006 World Cup in Germany in 2004.You can see highlights of his skills here…

Jamie’s childhood dream, finally came true, he was the man who scored the winning goal in the Gold medal match, which won Australia’s (the Kookaburras) first ever Olympic Gold medal. By winning the Gold medal in the final the Australian Men’s hockey team broke Australia’s 48 years, Olympic gold medal drought. The Olympic golden goal, which won the 2-1 victory over the highly rated Dutch team, was a genius shot from a penalty corner. You can see it on YouTube: http://www.youtube.com/watch?v=u7IqQ0646TM

Which other player has a claim to be called the recent day best men’s field hockey player?

De Nooijer was named World Hockey Player of the Year in 2003, 2005 and 2006 by the International Hockey Federation (FIH). De Nooijer was the first player in history to achieve this when he won the award, which was presented by Jacques Rogge for a record third time. Jamie Dwyer, as mentioned above equalled and later surpassed this record when he won the award for the third time in 2009, and again in 2010.

De Noojier excelled in major games. In 2006, de Nooijer was the decisive factor in the Champions Trophy final as the Netherlands claimed a record equaling eighth crown and de Nooijer’s sixth.

He was lightening fast and a wizard at sliding past his opponents. Also, his goal scoring abilities were famous. He always wore the number 14 shirt in honour of the Dutch footballing legend Johan Cruyff who played for Ajax. He is seen by many as one of the all-time greats. At the age of 37 and 18 years at the top he ended his glittering career with Silver at the London Olympics.