After becoming the most capped Kookaburras player of all time, a number of Eddie Ockenden’s former national teammates have toasted the 32 year on his latest achievement.

The North-West Graduates Hockey Club product grew up in Moonah, Tasmania before his debut as a 19-year-old in June 2006.

Ockenden’s now 14 year international career has him on course to attend his fourth Olympics later this year, to go with two World Cup and three Commonwealth Games gold medal winning teams among other major tournament successes.

“He’s a star. He ticks three integral boxes that must be considered when talking about the greatest of all time,” says former Kookaburras teammate Simon Orchard.

“He has reinvented himself over the journey, playing spectacularly across every line. He has performed on the biggest stages with aplomb, and he has elite longevity having played longer at a higher level than most, if not all.”

“He’s one of the only guys I played with who could win a game off his own stick, so he’s best described as understated, yet unbelievable.”

Former Kookaburras defender and fellow Tassie Tigers teammate Tim Deavin says he is super proud of Ockenden’s milestone, particularly as he is not a person that has let his success change him.

“Ed is the Greatest of All Time (G.O.A.T). He has won the Australian Hockey League Best and Fairest more times than I’ve had Sultana Bran,” said Deavin.

“The most successful Tigers captain we’ve had, he has dominated in World Cup and Olympic medal games and is a genuinely great bloke.” 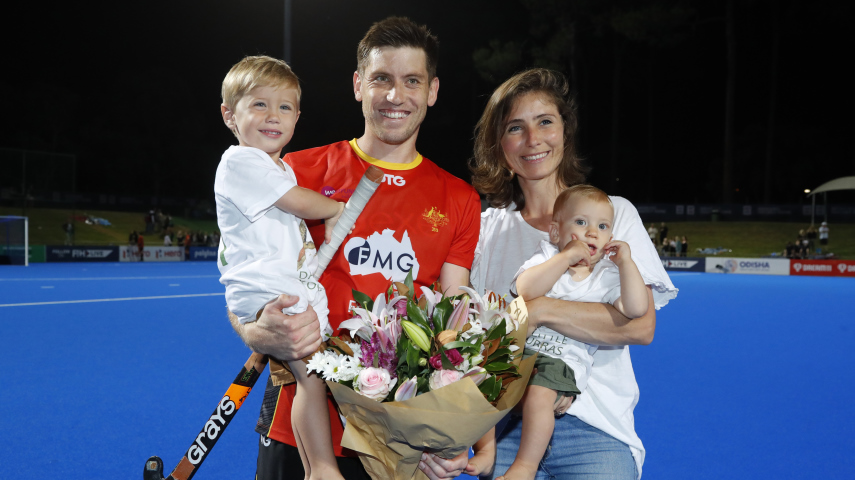 “Ed is a really strong leader from within the group. One thing you will see with Eddie is that his performance always rises when it matters,” Hammond said.

“His consistency is there but in moments when something needs to happen and it doesn’t always come down to flair…when you just need a really clean passage of play to put a teammate into space or a brave warrior moment, he rises to those.”

“His leadership comes in that he has a high knowledge of the game and he knows when to really apply himself.”

Ockenden’s parents made the trip across from Hobart to watch their son break the record, even painting a material banner with help from Eddie’s two young sons that read ‘Go Dad 366’ which they hung on the fence during the game.

“He has been blessed with a wiry body with huge lung capacity, great hand eye co-ordination and the perfect temperament,” said Eddie’s mum Angie.

“We’re not sure if he’ll want to go beyond Tokyo, but if he is playing well, which he is at the moment, and still loving the team environment, he may want to give the World Cup and Commonwealth Games another crack.

“He is 32 so he could possibly go around for a while yet…two greats of the game in Jamie Dwyer and Teun de Nooijer from the Netherlands were 37-38 when they retired.”

“An Olympic gold is the only medal he doesn’t have, so I am sure that is what he craves.”

Bring on Tokyo in July!